POSTCARDS FROM LONNIE
HOW I REDISCOVERED MY BROTHER ON THE
STREET CORNER HE CALLED HOME
by
Lisa Johnson
Biography / Photo Journal / Poverty Publisher: Rand-Smith LLC Date of Publication: January 14, 2020
Number of Pages: 200
Scroll down for the giveaway! 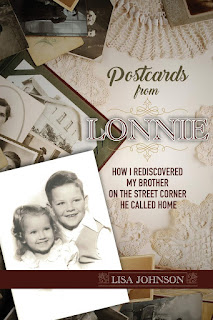 It all started on Christmas Day 1993. Lisa and Lonnie were sitting on their mom's rickety yard swing, when Lisa's curiosity took over. She asked Lonnie questions about his life on the street, about being homeless. To her surprise, he answered honestly, humorously, and thoughtfully.

That conversation continued throughout the next four years as Lisa wrote questions on postcards addressed to herself, then mailed them in packets to Lonnie at the flower shop on his corner. He wrote his answers and mailed them back. Lonnie answered a lot of questions and even asked a few, too. His detailed, matter-of-fact responses gave Lisa an unfettered view of a population living on the fringes of society and the issues they face every day.
Postcards from Lonnie is a dialogue between Lonnie, who speaks through the postcards, and his sister, who not only learns a lot about her brother but also about herself. Intimate and revealing, this is a unique family memoir and a universal story of love, respect, family, and ultimately hope. 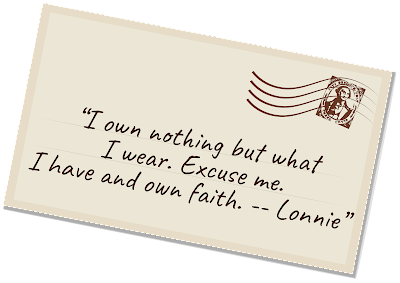 Where do I even start? How about that this book really pulled at my heartstrings and I felt so much for the author and her brother. I can't imagine my siblings or just any of my relatives being homeless and just feeling so out of touch with them. This is a really touching story that makes you come back to reality and remember that every homeless person has a background, and they have someone who still loves them. They have so many stories, and this one is Lonnie's.
The flow of this book went really smooth. When I first read the synopsis of this story, I was wondering how it would flow. I was pleasantly surprised when the cards did not compromise the flow of the story. I felt that I really found out about the author and her brother from the beginning to the end. One would also be impressed by how the questions on the cards went seamlessly from one topic of question to another. For instance, we learned about how Lonnie lived on the street, why he chose and why he still chose in that order. It was never out of order. Not sure if that was intentional or not, but it turned out great in the end.

"Lonnie's story would have been a report not on how Jesus helped him get off the street, but what it was like to live on the streets with Jesus."

Like I mentioned in the first paragraph, this story brings out all the feels. Like Lisa, I was always rooting for Lonnie to get up from his situation, admit that he didn't like it and take the necessary steps to get through. Then I was always surprised by how he wanted to live that way, and I always felt for Lisa as she had to hear this from her brother.

The only criticism I really have is that some of the scanned cards were hard to read, though Lisa does a great job of examining each individual card and explaining what might have been going on through Lonnie's head.

Overall, I give Postcard from Lonnie a 5 out of 5. It's not a super long book, so if you have some extra time on your hands, I really suggest this book. If you're going through a similar situation with a loved one, this book may help you feel less alone with your feelings. I applaud the author for telling her story as I know it may help different people in different ways. And I want to end this review by saying that on my way home from work one day while I was reading this book, I heard Amarillo By Morning by George Straight and it instantly made me think of Lonnie. Until next time, Happy Reading!

Lisa Johnson was born in Middletown, Ohio, at Middletown 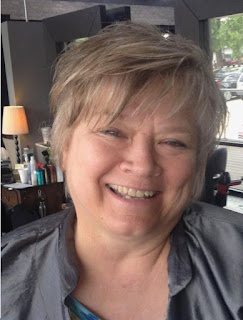 Hospital, where her brother, Lonnie, was born almost five years earlier. Two years after Lisa was born, they settled in Houston, Texas. In a couple more years, they moved to Baltimore, Maryland. Before Lisa started elementary school, they moved again, to Atlanta, Georgia. Lonnie was in fifth grade and was starting to misbehave in his classroom, not “applying himself.” A new first-grader, Lisa applied herself big time, and, once she got a taste of the praise and affirmation that came with high grades, she was hooked for life.
By the time Lisa was in junior high, they had moved again, to Topeka, Kansas, and as she started high school, they moved back to Houston.
Lisa went to college, Lonnie got married. Lisa got married, Lonnie’s daughter was born. Lonnie got divorced, Lisa got divorced. Lonnie’s daughter drowned in the bathtub. Lisa graduated from college, went to graduate school (where she got a good taste of misbehavior but lived through it). Lisa moved to Houston to mooch off their parents for a year or so. Lonnie remarried. Lisa moved to New York to teach at Queens College, CUNY, but soon found her dream job as a copywriter in a large New York ad agency.
Lonnie got divorced and disappeared onto the streets of Houston. Lisa moved to Atlanta. Their dad died. One Christmas Day, Lonnie and Lisa dreamed up an idea for a book. She started sending Lonnie questions on postcards, and he answered every one.
Lisa quit the advertising business to go to seminary — loved seminary, hated being a church-based chief executive officer. She returned to Houston, where their mom still lived. Lonnie died. Lisa found a job writing corporate stuff for a large oil-related company.
Then Lisa finished the book she and her brother had dreamed up: Postcards from Lonnie: How I Rediscovered My Brother on the Street Corner He Called Home. 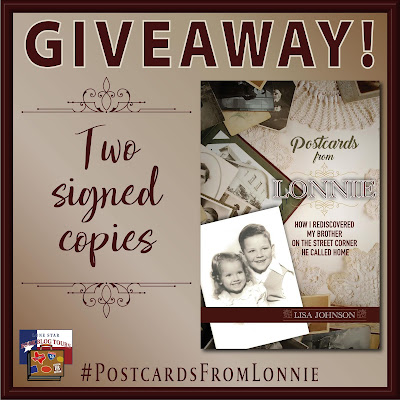