Book Review: The Phantom of the Opera by Gaston Leroux

I was thinking to myself one day, what do I want to a blog on? It dawned on me that since I read a lot of books throughout the year, why not start a book review type of blog? When I came up with this brilliant idea, I was in the middle of reading Phantom of the Opera, which is one of my favorite love stories of all time! I had never actually read the book, but I have seen the it on Broadway (and will be seeing it again this October! Eeep!) and I own the movie and the soundtrack and have lots of memorabilia! Even though I have been a fan for a long time, I went into Half Price Books one day and found that there was a book! I think I always knew that the story originally came from a book, but with work and college, I never got around to finding it. Now that I have it in my grasp and have finally finished it, I can give you a proper review! 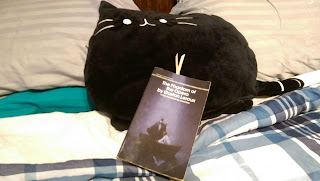 
I obtained the 1990 edition with translations from Lowell Bair. There were more up-to-date editions, but this cover on this one really enchanted me (as you can see above). The original copy was made in 1911 in Paris with the title: Le Fantome de I'Opera (Phantom of the Opera in French). The author, Gaston Leroux, was a suspense and mystery writer. He was also a crime reporter and war correspondent for a French Newspaper, which made him perfect for writing his types of stories. He eventually passed away in Nice, France 1927 and left his other works of art, The Mystery of the Yellow Room and The perfume of the Lady in Black.

First off, I like the way this novel starts! The book begins through the eyes of someone from the opera going back and wanting to investigate what had happened in the opera during the time of the Phantom. The whole novel is a big investigation and it goes through the process of written accounts, interviews and other forms of C.S.I. I think that it's a fascinating take on storytelling and one that was probably completely different back then. I also liked that is was told differently from the other versions of the story, but we will get more into that later.


Another aspect that is admirable was the detail. There were so many questions that I had, and they were all  answered, leaving the audience no questions of doubt. The characters were well thought out and had their own personalities. The way Leroux described the Phantom completely changed my internal picture of him, at least the way he looked.

I would also like to include that the little history facts were delightful insights. Who would've known there was such a position as the opera "Rat-Killer."

The fiery face suddenly vanished into the shadows while the corridor ahead became lighter as result of what the rat-killer had just done with his shaded lantern. Before, so as to not frighten the rats in front of him, he had kept the lantern turned toward himself, illuminating hi own face; now, so that he could go faster, he was lighting the darkness ahead of him. He hurried forward, taking with him all the climbing, squeaking waves of rats, all the countless noises (pg.204)

As you can see, rat-killers are like the piped-piper, but with bigger rodents and in sewers. Another job we have come to figure because of this book are the "Door-Closers." Door-closers were "decrepit former stagehands"(Pg. 199), that opened and closed door throughout the opera and cellars of the opera. They were also known as "Draft-Stoppers," because they were in charge of not letting drafts get in to the opera, for it was bad for the singing voice.

What I Least Liked


The very first thing that I would like to point out is Raoul's character. He is, for lack of better words, weak. He stalks Christine the majority of the book, such as sneaking into her dressing room to listen to her conversation with the Phantom, twice and he follows her into the graveyard with the Phantom. Raoul is also too obsessed with Christine, as we can see in the stalking and next with barging into her house and demanding her to give up Phantom's name. He is willing to runaway with a girl that has pushed him away a couple of times after only a month of "pretend engagement." The last thing about Raul's character that I am going to point out, is that he is weak minded. When he is trapped in a torture chamber with the Persian, he goes mad way before the Persian gives up hope.


The torture was beginning to have its effect on a mind unprepared for it. I tried to combat it as much as possible by calmly reasoning with poor Raoul...And I promised him that if he let me act without distracting me with his shouts and frantic pacing, I would discover the secret of the door within an hour. He lay down on the floor, as if he were resting under the trees and said he would wait till I found the door of the forest, since he had nothing better to do(pg. 241).

His character is weak-hearten and even though they are in a torture chamber, they were not in there long before he went insane. We can also get the sense of feeling that he is lazy because, like the quote states, he has nothing better to do, and lets the man that lead him to where he wanted to go do all the work.

Besides Raoul, there is a chapter that a reader might find fatigued. Chapter 17 was about Richard and Moncharmin finding out how the Phantom was taking there money and replacing it with fake money. Though, this is a nice detail to have, I did not find it necessary, nor intriguing enough to have this concept dedicated in being a whole chapter.

One last thing was that even though I liked Christine's character, the audience may find her to be bit childish at times. For instance, she made up the whole fake engagement with Raoul and even though it was so that Phantom would not find out, I still thought it was a bit too grade-school of a move.


I felt that this had to be necessary, because the whole time I was thinking of Andrew Lloyd Webber's version of Phantom of the Opera. Now, as I admitted before, I watched the play and movie before I read the book (sorry!). That's something that I do not usually do, but I was like 9 at the time and I didn't know there was a book at that point! Anyways, there are four main aspects that a die-hard Phantom of the Opera would notice is a little bit different, but an find solace in things that got to be part of today's Phantom.

1)One big thing that I want to point out first, is that the Phantom actually has a name! It's Erick! Not Phantom! I feel that the reason that they do not give him a name in the current version, is because i makes the Phantom more of a phantom. You don't know his name and he automatically becomes a little more mysterious.

2)The torture chamber that Erick has is not in the newer version, but one might think that it might have been a good idea to include it. Though, including the chamber might change Raoul's character in the newer version. The torture chamber is remarkable in the sense of detail and how creative it is. Okay, so this chamber is suppose to be for ultimately killing people through a way of illusions, but it is so interesting, you cannot say that it was bad. The whole chamber plays mind games on you, such as thinking you're in a forest at first, then when your thirst starts to quench, it turns into a desert.

3)Erick's background is another difference from the two versions. In the classic version Erick had a mother who didn't like his deformity, ultimately making him leave to join the circus. He then grew up to fight in a war and when he went to Paris. When he was in Paris, he helped build the architect of the opera and made the countless under passages that only he knew about. He ended up staying down for the remainder of his life, acting as the Phantom of the Opera.

There are other little differences here and there, but these are the ones that can be stood out the most. While there are a variety of different aspects, there are a few that remained the similar. Though, I could make a list of similarities, I just wanted to point out one that is found to be the pinnacle of every version.

In both versions, Erick realizes that if he truly loves Christine, he should let her go. Christine is doesn't love Erick in a romantic way, but merely a sorrowful and forced way. At the end of both books, Erick unclouds his vision and lets Christine run off with Raoul.


Overall, I enjoyed this and would completely recommend reading it, especially to a Phantom fan. Yes, the book may be a little different from the version we've come to know and love, but it is still a beautiful story. There may be some instances where you may not understand something, but there are cliff notes that are starred and put at the bottom of the page for you. This was not a hard read, but I found some moments where I wanted to skip a chapter (chapter 17), but wanted to make sure that I didn't miss anything worth knowing. I found myself not wanting to put down the book, even though I already know how it's going to end. If you would like to read this version of the story, here is link.

The next time you get a chance, put on something comfortable, put on some candles or incense, pick up a copy of Phantom of the Opera and remember to pour some wine!

Red or white liquor,
Course of fine!
What can it matter,
So we have wine?