Showing posts from January, 2023
Show all

Hey Ya'll!  I'm back with another review of one of my favorite authors and series. I understand it's going to take me until my death bed to read this whole series, but there are so many books I want to read in the world and so little time to read them all. For those that are new, I've been reading this series since I was about 16ish years old and it's taken me this long to get to 13 (technically 15 since there are 2 holiday books). But enough of my babbling, onto the review!   About the Author Janet Evanovich has been and still is a #1 New York Times best seller for multiple books she has put out over the years. Her first installment of the Stephanie Plum series is called One for the Money , which was released in 1994 (the year before I was born), and is still going with Going Rogue , the 29th book in the series. If you haven't heard of the Stephanie Plum series, it is basically about a young, bounty hunter from New Jersey just wanting to pay her rent and n
Post a Comment
Read more 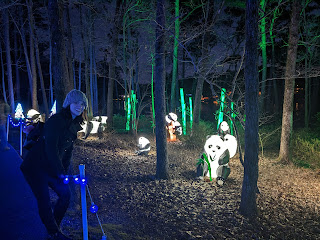 What comes to mind when you hear someone saying they're taking a trip to Arkansas? Probably not much at first, but let me tell you, Arkansas is heavily underrated and we all should take a couple days or more to enjoy everything Arkansas has to offer. My husband and I traveled to Hot Springs, Arkansas from December 27 - 30. We both are off during this time and wanted to take a little trip as a gift to each other. I really wanted to travel somewhere with a national park and he wanted to go somewhere that wasn't too long of a drive and didn't have to spend an arm and leg on travel. We ended up at Hot Springs and here's everything you need to know.  What We Did   While some might not think there is a lot to do in Arkansas, let alone Hot Springs, you are surely wrong. We found our days filled with fun and always doing one thing or another. Here are some of the things we did while at Hot Springs, Arkansas:   Hiked Around Hot Springs National Park :  Hot Springs National Park
Post a Comment
Read more
More posts