Showing posts from December, 2021
Show all 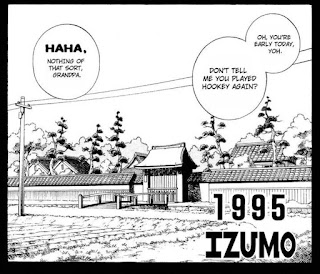 Hi all! It's been a while since I've written about a manga. I've been doing a lot of video reviews lately, but I still enjoy writing, it's just I don't seem to have enough time for both... most of the time. But today, I really wanted to talk about the Shaman King Osorezan Revoir Arc, because it is one of my favorite arcs in manga of all time. Therefore, I wanted to get my thoughts out in as many ways as I could! So, without further ordo, let's talk about this beautiful arc.   Osorezan Revoir Arc  The Osorezan Revoir Arc tells the story of when Anna and Yoh first met, and it gives us so much more context to some motivation behind Yoh and more story on why Anna is so OP.  Our story starts right after Yoh gives up being the Shaman King in order to save Ren, who has died. The Iron Maiden says she can resurrect Ren only if Yoh gives up being in the Shaman Tournament. He agrees and he starts saying sorry to everyone who he ever made a promise too, and as his oracle h
Post a Comment
Read more

PERFECT PAYBACK The Pepperman  Mystery Series by BY BILL BRISCOE COVER REVEAL Genre: Fiction Categories: Mystery / Thriller / Suspense Expected Publication: February, 2022 Number of Pages: 250 pages  When Jim and Laura Pepperman find a musty German Olympic jacket and an old journal in their attic, they stumble onto a gripping pre-World War II story of a cousin Jim knows nothing about. After a career-ending injury forces Hans Pepperman to lose his spot on the 1936 Olympic boxing team, he trades his athletic aspirations for a degree in mechanical engineering and secures his dream job working for the famous Willy Messerschmitt. Tasked to solve the stalling issues of the BF109 fighter plane engine, Hans finds himself smack in the middle of the Abwher Intelligence Service’s radar. Pro-Germany but anti-Nazi, he reluctantly agrees to help flush out the spy leaking secret information on the BF109 engine to foreign agencies . . . and finds himself a s
1 comment
Read more