Rainy Books: When The Men Were Gone 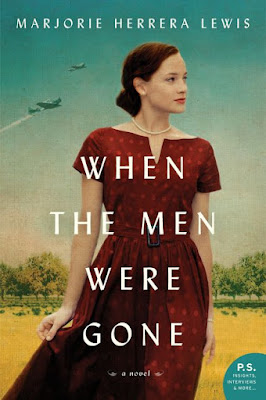 A cross between Friday Night Lights and The Atomic City Girls, When The Men Were Gone is a debut historical novel based on the true story of Tylene Wilson, a woman in 1940s Texas who, in spite of extreme opposition, became a female football coach in order to keep her students from heading off to war.
Football is the heartbeat of Brownwood, Texas. Every Friday night for as long as assistant principal Tylene Wilson can remember, the entire town has gathered in the stands, cheering their boys on. Each September brings with it the hope of a good season and a sense of unity and optimism. Now, the war has changed everything. Most of the Brownwood men over eighteen and under forty-five are off fighting, and in a small town the possibilities are limited. Could this mean a season without football? But no one counted on Tylene, who learned the game at her daddy’s knee. She knows more about it than most men, so she does the unthinkable, convincing the school to let her take on the job of coach. Faced with extreme opposition by the press, the community, rival coaches, and referees -- and even the players themselves -- Tylene remains resolute. And when her boys rally around her, she leads the team -- and the town -- to a Friday night and a subsequent season they will never forget. Based on a true story, When the Men Were Gone is a powerful and vibrant novel of perseverance and personal courage.

PRAISE FOR WHEN THE MEN WERE GONE:
"Sublimely ties together the drama of high school football, gender politics, and the impact of war on a small town in Texas.” – Best of Books, 2018, Sports Illustrated
“A beautiful story that stays in your heart long after you finish reading.” - Jodi Thomas, New York Times bestselling author “Based on a true story that most people probably don’t know, readers will find plenty to love in Herrera Lewis’ debut.” -- Kirkus Review 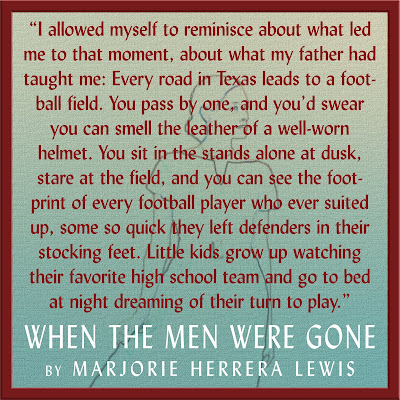 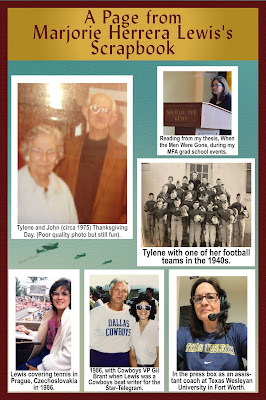 Marjorie Herrera Lewis is an award-winning sportswriter, named the first female Dallas Cowboys beat writer when she was with the Fort Worth Star-Telegram. She later joined the SportsDay staff of The Dallas Morning News, where she continued to cover the NFL and professional tennis. She is currently a contributing sportswriter for PressBoxDFW.com.
While writing When the Men Were Gone, she became inspired to try her hand at coaching football herself and was added to the Texas Wesleyan University football coaching staff in December 2016. Marjorie has degrees from Arizona State University, The University of Texas in Arlington, Southern New Hampshire University, and certificates from Southern Methodist University, and Cornell University. She is married and has two grown daughters and one son-in-law.
WEBSITE    FACEBOOK   TWITTER  INSTAGRAM   YOUTUBE AMAZON AUTHOR PAGE   BOOKBUB
-----------------------------------------
GIVEAWAY!  GIVEAWAY!  GIVEAWAY!
THREE SIGNED COPIES OF WHEN THE MEN WERE GONE
June 18-28, 2019
(International) 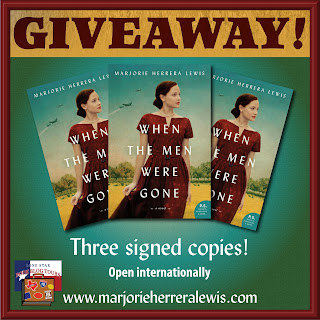 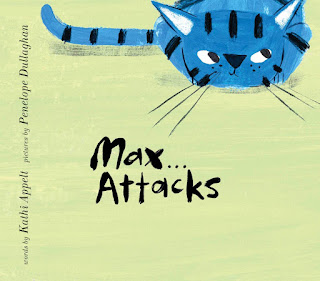 Fish and birds and lizards and socks…is there anything Max won’t attack?
Watch your ankles and find out in this clever, rhyming picture book about a very naughty kitty cat. Max is a cat. He attacks. From socks to strings to many a fish, attacking, for Max, is most de-lish. But how many of these things can he actually catch? Well, let’s just say it’s no even match. 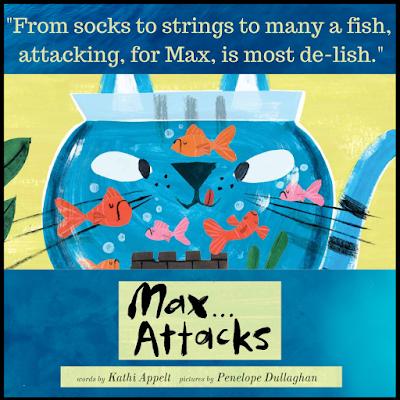 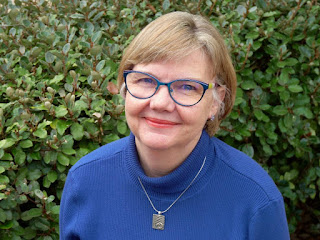 Kathi Appelt is the author of the Newbery Honoree, National Book Award finalist, PEN USA Literary Award–winning, and bestselling The Underneath as well as the National Book Award finalist The True Blue Scouts of Sugar Man Swamp, Maybe a Fox (with Alison McGhee), Keeper, and many picture books including Counting Crows and Max ... Attacks.
She has two grown children and lives in College Station, Texas, with her husband and their six cats. She serves as a faculty member at Vermont College of Fine Arts in their MFA in Writing for Children and Young Adults program.

Penelope Dullaghan is an award-winning illustrator whose work includes illustrations for ad campaigns, book publishers, magazines, newspapers, products, videos and most recently, children. Max ... Attacks is her debut picture book.
Penelope works from her home studio in Indianapolis, Indiana where she also home schools her daughter, plays in the river behind her house, and tends to her front-yard garden.
She is especially interested in collaborating with brands that support sustainability, simplicity, and wellness. Connect with Penelope on her Website. 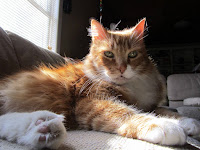 The real Max was neither blue, nor did he have a switchy tail. In fact, he didn’t have a tail at all. He was an American Bobtail, almost fire red, and in his prime he weighed in at over twenty pounds. For seventeen years, he served as best friend and roommate to the author’s oldest son Jacob Appelt, who adopted Max from the local animal shelter. Together they wrote music, traveled, entertained friends and family, and kept an eye on the neighborhood parrots. Even though Max was famous for attacking anything that moved, he was, and always will be, the biggest, sweetest cat ever!
And many thanks to Jacob for the line: “a mighty nap attacked our Max.” Best line in the book!
-------------------------------------
GIVEAWAY!  GIVEAWAY!  GIVEAWAY!
THREE SIGNED COPIES OF MAX ... ATTACKS
June 11-22, 2019
(U.S. Only) 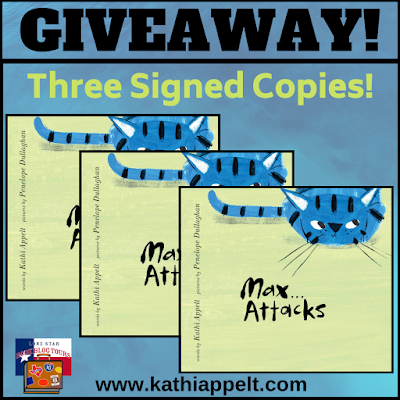