Showing posts from May, 2020
Show all

STORMS OF MALHADO by MARIA ELENA SANDOVICI Genre: Historical Fiction / Ghosts Publisher: Independently Published Date of Publication: March 26, 2020 Number of Pages: 252 Scroll down for the giveaway! Galveston Island, Texas, September 2008 Katie doesn’t believe in ghosts. And she certainly doesn’t believe the rumors that her family’s home is haunted, despite its tragic history: two young women who lived there in different eras died in hurricanes — one during Hurricane Carla in 1961, one during the Great Storm of 1900, the greatest natural disaster to befall the United States. But that was the past, a fact Katie reminds herself of when she returns to Galveston to await Hurricane Ike with her parents and boyfriend in her family’s Broadway mansion, hoping to rekindle her flailing relationship. While Katie is not afraid of the ghost stories she’s heard, she is afraid of the monster storm app
1 comment
Read more

THANK YOU, GARDEN By  LIZ GARTON SCANLON Illustrated by Simone Shin Children's Picture Book / Poetry / Environment / Ages 3-7 Publisher: Beach Lane Books / Simon & Schuster Date of Publication: March 3, 2020 Number of Pages: 32 A community garden unites neighbors in this celebration of all the things that grow there, from flowers and fruits, to friendships!  This ode to working together for a better world will have young readers wanting to plant gardens of their own! CLICK TO PURCHASE BookPeople ║ IndieBound   Barnes and Noble ║ Amazon Liz Garton Scanlon is the author of many beloved books for kids, including the brand new Thank You, Garden , as well as the Caldecott Honor book All the World and others, including several co-authored with her pal Audrey Vernick. Scanlon also wrote the middle grade novel The Great Good Summer and is published i
Post a Comment
Read more 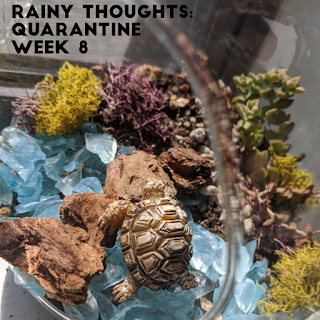 You guys, it has been 8 weeks since I started quarantine(ing) and I am measuring my quarantine by when I started working from home, so that has been a full 8 weeks. It's crazy. Week 8. It has me writing letters to friends and doing renditions of Broadway musicals. For those of you who don't know, I took theatre from middle school to high school and even took a class in college. That was actually going to be my major in college until I came to the realization that if I can't sing, I was not going to make it. So here I am, making my poor furbabies and husband endure my performances. Quarantine also has me feeling accomplished. I have done quite a lot, and purchased quite a lot, for stuff I've been needing to do and get for the house but just didn't have time or was using the money for something else. But now, I don't have any excuses. My husband and I also have this great cleaning schedule going on and I'm definitely going to miss that once we go back to w
Post a Comment
Read more
More posts