Book Review: Punk Rock Blitzkrieg: My Life as a Ramone by Marky Ramone with Rich Herschlag 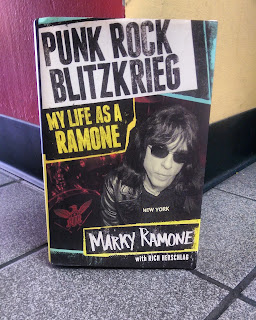 If you don't really know me, then you wouldn't know that I am a Ramones fan. If you do not know the Ramones, then I suggest you check them out on iTunes, or YouTube or wherever you listen to music. Now I got this book because I asked for it for my birthday about 2 years ago. I got it, but it was at the bottom of my stack of books I intended on reading, and of course classes and work get int he way sometimes of me reading. Sometimes it's a hard to choose whether to read or make sure my bills are paid,a long with getting an education. I have now found a better balance, so I am getting to that stack of books! When it finally reached the time for me to read it, I was so excited. I really like the Ramones, but I don't know too much about them and there history. Maybe one day there will be a movie about them, which I will be there to attend. Until then, here is my review on Marky Ramone's bibliography about his life in the Ramones. HI HO LET'S GO!

First off, this is a book about Marky's point of view of the band, not everyone's, but he does get a good view of everyone else. Now Marky originally was a replacement for Tommy Ramone, who was let go of the band in the late 1978, which is when Marky, aka Marc Steven Bell, joined the band. Marky Ramone went on to play drums for the Ramones for the next 15 years. He is the only remaining Ramone left and is still doing what he loves, playing music around the world and on Sirius XM.

This book was very fun and enjoyable to read. Viewers will appreciate that Marky lets you into the life of everyone else. We get to see a little bit of everyone, good and bad. We also get to see a good portion of how Marky was doing during his whole Ramones life, such as his life long relationship with Marion, or when he is eating dog food. He does not cover up his messes or his addiction, but gives it to us in detail and in a way, reaches out to the audience for those who may be struggling with an addiction of there own.

There were lots of funny quotes and so much teenage angst from everyone. There's also funny things that they did back then that people would probably go crazy about now. An example of this is when Marky use to ride a hearse to nursery school:

" One strange thing about our nursery school was the school bus. We didn't have one. What we had was a Cadillac hearse converted into a kind of station wagon minibus. IT was big and black and came rolling up to the school like there was a funeral to attend. When the kids saw the hearse coming up the block, we would all run to try to get into the backseat first. It was roomy and padded back there, and it was cool to think this same compartment was once used for dead bodies. I loved riding down with the window down. We all loved looking out the back window and making weird faces at the cars behind us" (Ramone 8-9).

I just think that's kinda weird and funny and weird at the same time. This also reminds me of a type of story that my grandparents tell me. It kinda sets the timeline for you.

The book itself is very well-written. There are some celebrity books that come out and are completely fail. They talk about just themselves and not the interaction they have with other things. Marky gets a good glimpse into his reactions and his interactions with everyone around him. It's not just him, its everyone, because he knows that there are more people in his life than just himself.

If you happen to read this Marky, I'm sorry. There were two things that I questioned in this book.The first being that if this was going to be an autobiography of Marc Steven Bell and a good portion of his life before the Ramones, then maybe it should have been a different title. Though, I do agree that knowing Marky's past first and knowing how and why he got into the Ramones does tie in everything, I still think it should've been a bit shorter. We do not get to Marky being part of the Ramones until chapter 8.

The only other thing that I have to say is WHAT HAPPENED TO MONTE!? In case you haven't read the book or really know too much about the Ramones, Monte was the driver, the the keeper, the glue and everything else in-between. At the end, we find out what happens to everyone else but Monte. I would really like to know.

Overall, I was very pleased with this book. I didn't want to put it down and I was happy on learning new stuff that I didn't know about the Ramones. I even watched Rock n Roll High school again with my fiance who had never heard of the movie. I am also happy to find that Marky is still doing what he loves to do. I am a happy reader and I would recommend this book to any Ramones fan out there.

"A whole show was fifteen, maybe twenty minutes, and if that was too short? Fuck you" (Ramone 83).