- January 16, 2018
Yes, it's that time of the year again where I create a manga review, because I'm not done with the book that I'm reading because of the Holidays. I will have a proper book review for you next Month and they will start being regular, hopefully. Anyways, I'm really excited about this review, since I recently received all the original manga as a gift from my wonderful fiance. So onto my review! (SPOILER ALERT!) 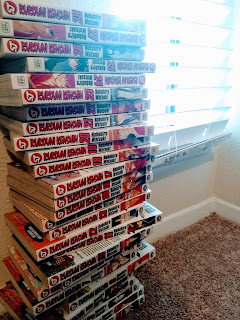 If you haven't heard of Rurouni Kenshin, then you haven't heard of one of the greatest fantasy, Meiji Era stories ever written into existence! Rurouni Kenshin, also known as Samurai X in most other places, initially appeared in Weekly Shonen Jump from April 1994 to November 1999. The story was written and illustrated by Nobuhiro Watsuki, who also illustrates another well-known manga, One Piece. The series then turned into an anime from January 1996 to September 1998.


The story takes place in the 11th year of the Meiji period in Japan (1878) and follows Kenshin, the red-headed, former assassin during the war. He earned the name BAkumatsu, or the Legendary Man Slayer, because of all the people he murdered. After something dramatic happens (will not spoil that for you), Kenshin decides to live his life out as a wandering swordsman who protects people instead of killing them. Kenshin meets an array of friends and foes along the way. The manga's recurring themes revolve around peace, romance, and atonement. 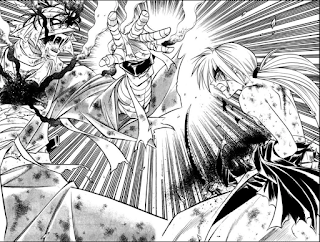 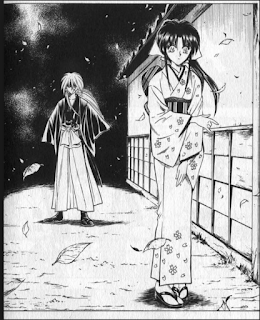 1. This manga is very enjoyable for multiple reasons. The first one I will note is the story. Fans of this manga, including me, absolutely love the story. It's a very enjoyable story, filled with both peaceful and action filled moments. The concepts and the arcs all flow together well and nothing is left up in the air or unanswered. It's a story that you want to keep reading until well into the night.

2. The action. Love it. There is blood and gore galore. Not on every page, but when their's a fight scene, there are no "jk lets be friends," moments. (Except one guy who ends up being their friend, but that's different). The manga is filled with great fight scenes, lots of development in power and isn't afraid to show that someone just got their ass whooped really bad.

3. The full title of Rurouni Kenshin is Rurouni Kenshin: Meiji Swordsman Romantic Story. And something I completely enjoyed about this series is that it is a love story, but it's not the kind of mushy crap I want to read about. The theme of love and romance is there, but some of it is metaphorical, and some of it is right in front of you. This is a subtle love story that plays a big part in Kenshin's character. It's both beautiful and tragic and one that readers will enjoy and fully understand by the end of the manga. 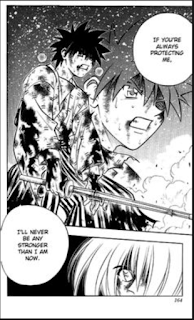 What is Least Enjoyable

There were very few things that I didn't like about this manga, but there is one thing. I just wasn't a big fan of Yahiko's character. For those of you who may not know, Yahiko is a friend you will meet early on in the manga. He is a punk kid who starts to progress and grow-up as the manga goes on. Now, I understand Yahiko's purpose as a character, but I honestly sped through his little moments in the manga. I just wasn't interested in his alone moments. But maybe that's just me.

Overall, I really enjoyed reading this manga and I have been enjoyinrg the few new chapters that came out this past year. The naime is nice (except that it doesn't end with the manga and the third season is all filler, but not completely bad). The OVA's and movie are excellent and the fan base is real. If you're interested in reading this manga, start with the original and work your way up to the new chapters.

Thank you anddon't forget to follow my updates on my social media pages! Happy Reading! 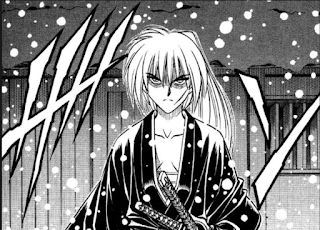