Showing posts from February, 2020
Show all

CODED FOR MURDER by DIANNE SMITHWICK-BRADEN Genre: Murder Mystery / Amateur Sleuth Publisher: DSB Mysteries Publication Date: September 26, 2019 Number of Pages: 358 pages SCROLL DOWN FOR THE GIVEAWAY!  Jade O’Neal is a senior at West Texas A & M University in Canyon, Texas. She’s on track to graduate with highest honors and a degree in history until she is accused of murder. She juggles her busy school and work schedule around taking care of an overgrown Rottweiler and being questioned by police until she finds a series of clues hidden in puzzle form. Time is against her as she follows the clues to find the true identity of the murderer while avoiding arrest and her own murder. PURCHASE THE BOOK   Amazon │ Kobo │   iBooks │   │ Barnes and Noble │   │ Autographed Copies │ Another great murder-mystery book that was right up my ally. Coded For Murder was an excel
2 comments
Read more 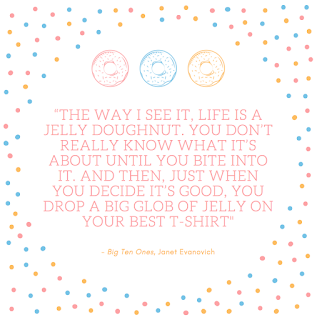 Hey fellow book lovers! It has been a minute since I have reviewed or even read a Janet Evanovich book. If you are new to my blog, I am a big Janet/Stephanie Plum fan. I have been reading this series for years now and I'm only on the 10th book (technically 11th since I read a Christmas special book). I've been reading a lot of different books by various authors, but there's just something about the winter season that makes me want to read some more Stephanie Plum. Here is my full review on  Big Ten Ones  by Janet Evanovich. A Little Bit of Background  Janet Evanovich  is a New York Times Best Selling author for plenty of her works. Her Stephanie Plum series started back in 1994. This book came out in 2004 and follows directly after the 9th book and Christmas special.  This time, our heroine faces a notorious gang in Trenton who wants her dead. Morelli warns that she's in too deep, and Stephanie more than agrees. But the gang won't let her bow out. With Ra
Post a Comment
Read more
More posts