Let me start by saying, it's not raining today, but I feel it in my bones that it will soon.. hopefully because it's crazy hot here in Texas! So, this is my first time reading this book. I know a lot of people have read it by now, but it's my first time. In school, we read Animal Farm, an equally eye opening book. I was so happy to finally read this book and I immersed myself in it. So now, let me tell you a little about it (SPOILER ALERT!) 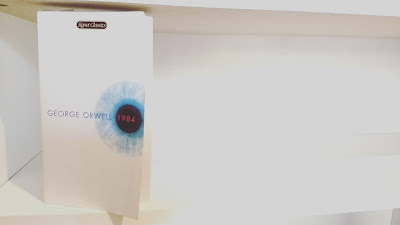 George Orwell is a very renowned writer for a number of his books, including 1984. Now 1984 was actually written in 1949. Orwell wrote this book because of what was going on with the world at that time (WWII, communism, etc). He wrote this book as a warning to all that man can easily become manipulated if the right people know how to do it. It's a scary thought, and after reading it, it's something that could and has happened before.

The main story follows a man named Winston who knows that the world is not right, but is not sure hot to go about that. Everywhere he turns, there is a monitor or people watching him, waiting for the slightest move to send you to the "thought police." Those who go to the thought police are almost never seen again.

What made this book enjoyable in a scary kind of way, was how real it gets. There is a part where Winston begs the thought police to take his girlfriend instead of him, even though he thought he would never hurt her in any way. When you get down to it, if your scared enough and get pushed around enough, you too can will defend your life with another's.

The whole world in which this book takes place, in a dystonpian country of Oceania in 1984, is really interesting to have come up with. Though, probably wasn't that hard, considering the time period this was written in. There is a lot of details and things explained that tie together that make this book intriguing.

One last thing I had to point out that was more interesting and intriguing than enjoyable, was howthe government changes history. They change history, so that the present can be explained and no one understands the past. They change words too, so that people cannot understand the feeling of wanting to overthrow the government, because they won't know how to express it. It's clever in a bad way, but very thought provoking.

"If the Party could thrust its hand into the past and say of this of that event, it never happened-that, surely, was more terrifying than mere torture and death (Orwell 34)."


What Was Least Enjoyable

The only thing I would have to say, is that the beginning was a little slow, at least for me. The other thing was that there are characters that are at the beginning then come out at towards the end and you kind of forget their name and have to go back to remind yourself who this person is. Other than that, I can't think of anything else that I did not like about this novel.

Overall, I would have to say this is a pretty good book. There is a reason teachers might make your read this in school and there's a reason it's still really popular. The ending, I have to say, is pretty sad from a psychological stand point, but if you have not read it, then I won't spoil it for you that much. Definitely pick this book up if you have not already done so. Or maybe see the it on Broadway (haven't seen it so can't say if it's good or not). Happy reading!


"Freedom is the freedom to say that two plus two make four. If that is granted, all else follows (Orwell 81)."
Posted by A.Borroel at 9:38 AM