- May 18, 2017
My second review on the Stephanie Plum series by author Janet Evanovich. I know it's a week past my usual monthly deadline, but I had so much stuff to do this month school wise! I was nominated for top 5 best capstone (senior project) so I had to do a whole presentation in front of a bunch of people! It was scary, but I made it through. I'm actually turning my senior project into a book (stay tuned for that!). Anyways, enough with my update! Let's get on to the review! (SPOILER ALERT) 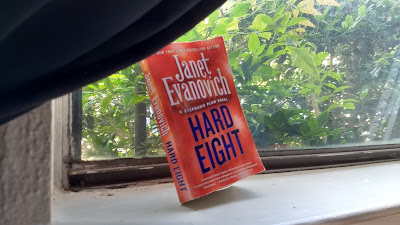 Janet Evanovich is a New York Times Best Selling author for plenty of her works. Her Stephanie Plum series started back in 1994. This book is her eighth installment out of 24 (I know, I'm a little behind). This book came out in 2002 and follows directly after the 7th book.

As for Stephanie, she is on another round about chase to find a missing mother and child. She ends up finding out that the person she is after and the mother and daughter she is try to find are connected. In Stephanie Plum fashion of course.

Janet has done it again! This installment was another fun and laughable read. I kept wanting to read it and was sad when the day would end and I'd be too tired to read.The eighth book makes for another great sequel that still has all the laughs coming at you.A new character, Kloughn, was introduced who was kind of annoying, yet funny at the same time. He also fits in well with Stephanie's unique sense of friends.

Something the reader can enjoy from this book is that it feels a little bit different from the other Stephanie Plum books. It's not a bad feel either. There is a lot more Ranger, which is not a bad thing. I feel that Ranger is a more mysterious character, which he is, but it was nice to have him more involved and present with Stephanie.

Another notable aspect were the bad guys. The Stephanie Plum villains are usually very brutal, but these guys had masks on. They were dressed as presidents and in bunny suits. That aspect made these bad guys stand out a little bit. Lots of people are scared of people in mask (at least I know I am).

The reader will also enjoy the fact that her mother kicked a little ass in this book. Towards the end, she ends up hitting the guy in the bunny suit and keeps on driving. Like a lady.

Just like my previous review on Seven Up, this book has almost nothing to complain about. I think that only thing that I have to say is that I kind of missed Morelli being Stephanie's knight in shining cop car. Even though her relationship with Ranger was super hot, I missed Morelli. I was pleasantly happy at the end of the book.

Overall, I enjoyed reading this book. Though I had a busy schedule, I really tried to find time to read this one. It was a happy, crazy, page-turner, and extremely funny book for an extremely hilarious series. I can't wait to read the next one and read more into this fictional, yet very relate-able character.