- November 12, 2019
One of my favorite movies of all time is Howl's Moving Castle. It is definitely my top favorite Studio Ghibli film tying in with Spirited Away. I always knew Howl's Moving Castle was a book before it was a movie, but I never got around to reading mainly because I knew that it was going to be different from the movie. With my last coupon for Half Price Books, I decided why not? I read the Phantom of the Opera book, how much different could that be? Here is my full book review of Howl's Moving Castle by Diana Wynne Jones. 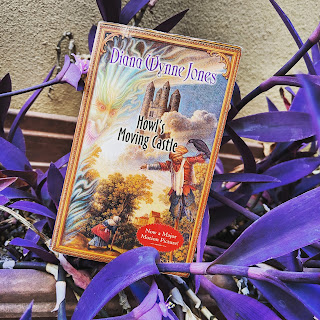 A Little Bit About the Author

Diana Wynne Jones was known throughout her career as a British novelist, poet, academic, literary critic and short story writer. She focused more on fantasy and speculative fiction for children and young adults throughout her writing career. Jones started her writing career in the mid-60's to, as she puts it, "mostly keep my sanity." (isn't that why we all write?) Her first book was an adult novel published in 1970 titled, Changeover.

Jones wrote Howl's Moving Castle in 1986 when she was inspired by a boy at a school she was visiting who asked her to write a book called The Moving Castle. In 2004, Hayao Miyazaki created the animated movie and was dubbed in 2005. The following year, Jones won the annual Phoenix Award from the Children's Literature Association, recognizing a children's book published twenty years later that did not win an award.

A Little Bit About the Book

The book follows the quiet and subdued Sophie Hatter, who's life was perfectly normal until the Wicked Witch of Waste shows up at her hat shop and turns her into an elderly woman. In this giant jigsaw puzzle of a fantasy, people and things are never quite what they seem. Destinies are intertwined, identities exchanged, lovers confused. The Witch has placed a spell on Howl. Does the clue to breaking it lie in a famous poem? And what will happen to Sophie Hatter when she enters Howl's castle?
Diana Wynne Jones's entrancing fantasy is filled with surprises at every turn, but when the final stormy duel between the Witch and the Wizard is finished, all the pieces fall magically into place.

This was such a charming book that held my attention from the very first page until the romantic end. I enjoyed reading Howl's Moving Castle and my predictions were true, it was VERY different from the movie, but it was far from being great. I don't this want this review to focus on the movie and the book, but I do want to say that even though they are different, especially when it comes to the focus of the plot, it was such a refreshing story. It was like reading a rendition of one of my favorite stories with the same happy ending.

The whole book is just a fun read. It's a great read for the younger, maybe middle school readers out there. It is also a great novel for the adults in the room who just want some fantasy in their life. It's a memorable story and it's also warm. Definitely a book I would pick up and read again.

Overall, this a great book to read for you, for your kids or for your elderly grandparent looking for a nice fantasy book to read. It's a book that will have you wanting more adventure and wanting to read more about all the characters.
Book review Book Review Blog Diana Wynne Jones fantasy book Howl's Moving Castle rainy days with amanda rainydayswithamanda