- October 13, 2017
Hello everyone! Yes, I have finally gotten around to doing a new book review! I wanted to ask you all a question first, do you think I should switch to wordpress or even Wix? I've been thinking of doing this for a while now, but I can't make up my mind. I'm fine with a really simple blog, but sometimes I don't feel like I can be as creative with my blog. I also don't want to lose all my content. Let me know your thoughts or suggestions! Anyways, onto the review! (SPOILER ALERT) 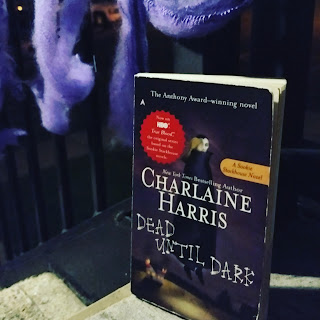 Charlaine Harris is a New York Times bestselling author who has been wriitng for the the past 30 years. She published her firstbookin 1981 entitled Sweet and Deadly. She published Dead until Dark in may of 2001,which started the Sookie Steakhouse series that spanned from 2001 to 2013. The book went on that year to receive the Anthony Award for Best Paperback Mystery. The series was then picked up by HBO and transformed the Sookie Steakhouse series into the popular show True Blood, which spanned 30 seasons.

The Dead unti Dark book starts off the Sookie Steakhouse Series by introducing the main characters, Sookie and vampire Bill.  Sookie is a small town waitress in Louisiana who has a peculiar ability. All turns upside down when the new vampire in-town shows up, along with a pecuiar string of murders.

There were tons of things to like about this book. One being that this was not a corny vampire book. It was like reading a murder mystery novel, but with vampires. It wasn't all Twilight, but it wasn't all Blood Ties, it was somewhere in the middle.

Something else I enjoyed was that the auhtor does a great job at making a whole civilization out of the vampires and integrating them into the human world. Being a vampire normalish, though people still find it wierd. They drink blood at the cafes, they have thierown clubs ad they also have statuses, etc. It can definitly be hard to create world like this, but Harris does wonders with it. 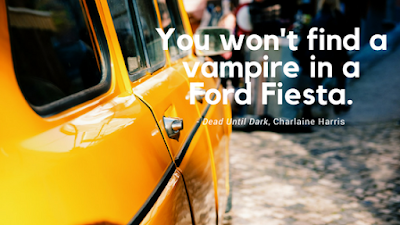 If you guys have read my other reviews, then you know that I am picky when it comes to dialogue. I feel that dialouge is key in creating a great book. Now, I didn't have a problem with the dialogue in this book, but when it came to the sex parts, one might say it felt awkard. "...turning his attention to my breasts. He toed off his sandals at some point."
(Side Note: I just don't find men in sandals attractive.)

The other least enjoyable thing was that there is a part where Sookie finds a stray dog. The whole stray dog part felt a little drawn out. 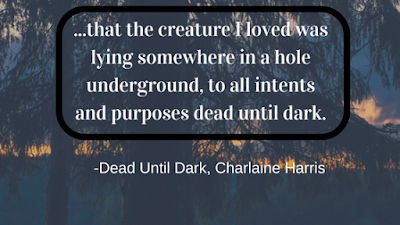 Overall, I liked this book. It was ike a littler roller coaster. I was really captivated at some point and a couple other points brought me down, but the good outweighed the bad for this one. I have actually been wanting to read these books, because I've always wanted to watch True Blood. I will definitely be reading the rest of the series, so more reviews to come in this series later on! If you are into vampire books, put this on your list of books to read and check out your local bookstore or library. Until next review, Happy Reading! 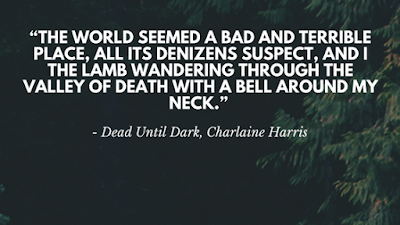