- February 10, 2017
Found another interesting book for .99 cents at a Goodwill! Just goes to show that you can find great books almost anywhere! Anyways, this took me a little longer to read, because school, work, winter break, family emergencies, blah, blah, blah, but I finished it! I am happy to be writing again. I find that writing can either take your mind off things, or help you cope with life changes. Either way, here is my review on The Bellwether Revivals by Benjamin Wood. WARNING: Spoiler Alert! 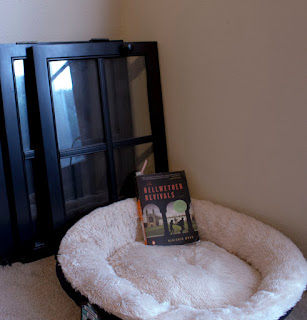 Benjamin Wood is an author and a Lecturer at Kings College. He grew up in Northwest England. This was his first publication, which won him a series of awards, including Costa First Novel Award. The novel is a British book, and has different spellings and narratives, such as using (' ') when someone is talking rather than (" "). The book is set in Britain with references to different scholarly figures.

This book is about a young adult named Oscar, who works at a nursing home and is best friends with the patients. Oscar finds himself acquainted with a young, well off girl with her brother and friends. After a while, you find out that her brother, Eden, really enjoy music, a little too much music. This book integrates the idea of music therapy with psychoanalysis and the whole story is set from there.

I have to say, I thought this book was going to be about experimental treatments at an enclosed facility, due to the back of the book. I must have read it wrong, but I kept waiting for one thing, but then it turned out to be a different kind of psychological thriller, which was rather pleasing and new to read.

The book has a little bit of everything fir everyone to enjoy, such as funny moments, sad moments, historical references and love scenes. There are times when you can relate to the character or the situation. Even if you can't relate, you can feel, such as when the two doctors of the book are silent lovers, yet they are both dying and won't confess a thing. There is also a big friendship theme to this book that can make the reader think of there own friends.


"The afternoons were for group photographs, posed on the rectory porch, all smiles and bunny-ears and arms around each other's shoulders; as well as quickly taken snapshots for which nobody was prepared, shut-eyed and funny faced. The afternoons were for sitting in silence around the big  wide patio table, reading books they found in the house; other times they were for contagious laughter, the sharing of jokes, silly ideas, idle thoughts; to speculate, to ruminate, to reminisce. Most of all, the afternoons were for the simple enjoyment of being together" (Wood 245).


I did not see the ending coming, and I loved it. The ending is a little bit gruesome, and one I didn't take into consideration. I felt that the book was going one way, but the ending was on point!

Well, this book does not get that interesting until chapter 3. The two chapters before that are introducing the characters, but it still seems a little bland. Everything starts picking up from the third chapter and it becomes a book you just don't want to put down!

Other than that, I don't really have much to say that was enjoyable. If the first two chapter don't grab you in,  don't worry, it get so much better!

I feel like most will enjoy this book. This definitely has to deal with psychology and the psychological suspense that comes with that. It can be a little confusing at first with all the names, but there aren't that many, so you will get them all right after a couple of chapters. If you have the stomach to discover something out of your element, try reading The Bellwether Revivals, it will not disappoint.

"She made his life worth writing about. So he wrote it down the only way he could" (Wood 145).
Benjamin Wood blog Blogger Blogspot Book review Book Review Blog Books costa first novel award goodwill goodwill finds Novel Penguin Books rainy days with amanda the bellwether revivals