- January 05, 2017
I was on winter break from school and rather than starting a new book, I felt like reading through a manga series that I have been reading since I was in the 5th grade (so about 11 years). The Yotsuba&! series is known for coming out super slow, and after a 3 year hiatus, came back this past past year with another volume set. I was completely excited and went to different stores, until I found a Barnes and Noble who had two copies sitting on a cart that an associate was stocking the shelves with. I thought it would be a cool idea to do a manga review on one of my favorite series, so here it is! 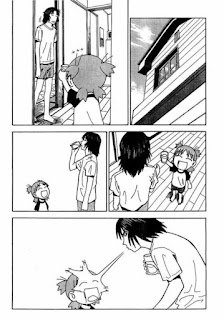 Kiyohiko Azuma has been writing the Yotsuba&! series since 2003. He is known for his manga turned anime series Azumanga Daioh. Yotsuba has not been turned into an anime, but Azuma doesn't think it would really work for an anime, since the chapters are short. Yotsuba&! revolves around a 5-year-old, green-haired girl named Yotsuba. She can be seen with four green pig-tails, which is how she got her name (her name means four leaf clover). She was adopted by Yousuke Koiwai when he was overseas and the manga starts off with them moving back to Japan, making Yotsuba somewhat of a foreigner. The series is called Yotsuba&!, because she is always interacting with something or someone. It's her reactions that really make each chapter different, which is probably a reason why it takes a while to write a Yotsuba volume. Yotsuba is best known for it's character Danbo, the box character that is on top of this paragraph. Danbo can be see in various travel and toy photography. He even got his own little spin-off anime called Nyanbo! 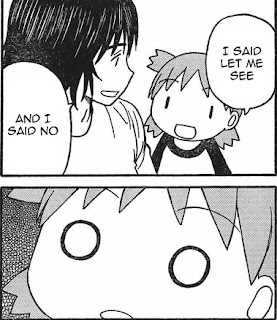 What is enjoyable so far

One thing almost any Yotsuba fan will tell you is that you can read an reread this series over and over again and it still makes you happy. Azuma has written this series to be something that can never get old. All the jokes are original and it's so interesting to see how Yotsuba acts in her surroundings, even if you already know. It's a nice manga to come home and read after a long day of school and work.

The next enjoyable accept is that it's enjoyable! Azuma captures the innocence of a child and it's so amusing. There are no really unhappy parts to this series, because much like the slogan says (Enjoy Everything!) Yotsuba finds the happiness in everything. There's not much drama or action or love interest in this manga, it's just fun!

Another thing about this manga that people can and ill appreciate are it's characters. Each character is unique in there own way, with there own personality. No two people are alike and trust me, there's quite a few people you'll run into with Yotsuba. Once you meet a character, you will eventually meet them again in another volume of another chapter. The more characters, the more different stories the manga portrays, which keeps the anime interesting. 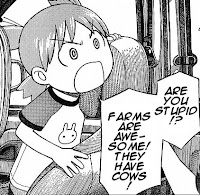 What is least enjoyable so far

One thing that I have to say is that I would like an origin story. We find out in the very first volume that Yotsuba was found across the sea. What we don't know is the state she was in, how old she was, why she was left there, what Koiwai was doing overseas, normal questions any reader wants to find out. Having a background story might not be in the traditional Yotsuba way, but it would be nice to find out how everything came to be. This may not be something necessarily I don't like, but more of its a mystery kind of thing and I'm sure readers want to know.

The only other thing would be that sometimes Yotsuba can act like a brat and as I get older, those moments make me mad. Not sure if that bothers anyone else, but I know that all kids throw temper tantrums every once in a while, so I get why Azuma makes her like that sometimes. 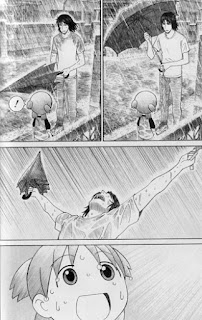 Every manga, or really any pro long story, goes through phases of which character gets more screen time, or in this case, which characters Yotsuba interacts with. I have to say that the moments with her dad are just too heart warming to not pass up. Readers can be glad that Koiwai does not have a love interest, which is the way Azuma wants it to be, or else it would make it more complicated.

Yotsuba is a wonderful anime that any age or type of reader can get into. It is a manga you won't ever get enough of. Readers can be excited to find that Azuma is currently working on more chapters for Yotsuba&! and we can only hope it comes out soon! Overall, Yotsuba is a simple plot with a simple story and simple message: Enjoy Everything! 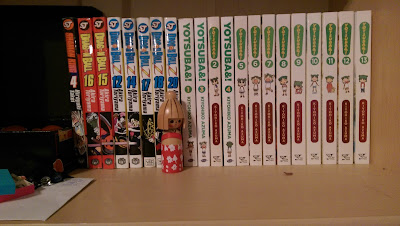